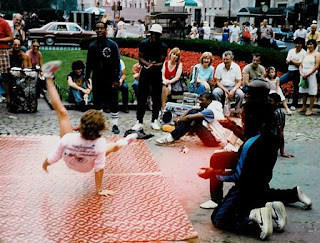 Street Performing in Seattle Back in the Day circa '83

Lane Davey, known in b-boy circles as Laneski, was one of Seattle's very first b-girls. Of course, back in '83, "nobody used the term B-Girl," she writes. "Being a girl [breaker] was such a novelty, it wasn't really a problem." And dancing as a career? "Not in my day. That really cracks me up. I would have to watch MTV all day long just to see one Hiphop video, if I was lucky." At the age of 14, Laneski was inspired by the dance moves in Michael Jackson's videos to take a breakdancing class offered at the Bellevue Athletic Club by the Seattle Circuit Breakers Crew. Her gymnastics background gave her the strength and agility to quickly pick up the tough moves they taught, and "the guys in the crew sort of adopted me by the end of the six week class and began asking me to dance with them whenever I could."

She was mentored by Dee Rock, a b-boy, dj and leader of the Seattle Circuit Breakers now known more famously as DJ Mr Supreme. "He taught me all about the culture, the style, and gave me a tape of b-boy footage which became my learning tool. You weren't a b-boy if you didn't know what was up with the culture and the style, and you had to be able to tag your name and walk all funky. You had to know what was new and fresh in every element." Laneski and her fellow breakers paid close attention to fashion and style. She remembers sailor hats with graffiti on the flip, Adidas suits, kangol berets, Pumas, name belt buckles and chains, Lee jeans and plaid Gotcha shorts. "It was strictly New York. Anything from L.A. was considered wack."

DeeSki, aka Joe'l Herd, taught Lane how to dance in the clubs: the prep, the peewee herman, the cabbage patch. "People would battle with those dances too. Some got so funky, they would literally be dancing with their heads just a few inches from the floor. The clubs had so much crazy energy. I got in all those places at 14 and 15 years old. It wasn't strict back then, even the lamest fake IDs were fine." Battles certainly weren't restricted to the clubs, though. "I went to the mall to find a battle, and if you had your shoes tied b-boy style, you were fair game. My girlfriend used to get mad at me for walking around looking at everyone's shoelaces all the time." Now, though, things are more organized. "We all kinda know each other and we know what everyone's going to do."

"It was about power moves back then," Laneski explains. "It was raw and we were making it up as we went along. You didn't hear people saying that's the right way or wrong way to do something; it wasn't wrong, it was new." Though b-boys today may look more polished with their moves, "it looks so practiced that it all starts to look the same after awhile, and everyone's worried about if they did it right or wrong instead of just getting funky and being spontaneous." Laneski specialized in the power moves, such as flairs, swipes, turtles, and suicides, and this was more than good enough. "I would go in the circle and not even uprock or footwork or anything, just pop into a move and I would win."

As one of the pioneers of the b-girl movement, Laneski has a unique perspective on what it's like to be a woman in the breaker culture. "Too many girls think because they are cute they can go in the circle and do the same basic footwork ten times in a row to get attention., but they are preventing the guys from keeping the momentum of their circle….The women need to earn their respect. Girls try to be a spectacle and push the girl thing sometimes when they need to just fit right in with the guys and practice hard enough to keep up with the circle. There will always be those guys who don't want to see a girl in the circle, but…for every guy who insults you, there are probably 100 who secretly admire your dedication to do what you do."

For Laneski, being white was more of an issue than being female. But that doesn't mean she's not angry about the hiphop industry's insults to women, or that she's happy with the way media portrays her fellow females. She writes about attending B-Girl Be in Minneapolis and encountering many unheard-of female hiphop artists from all four elements, some of whom had been performing as long as she has. "We are talking some seriously talented, intelligent and beautiful b-girls that never get acknowledged, which makes it hard for other women to get inspired to have skills."

Is the outlook bright? "Women are coming together, discovering our own roots and embracing our own impact. We are almost our own element since we do things our own way without own flava." That's a yes. And Laneski's advice to women in hiphop: "Remember that fame and fortune does not bring you happiness, but following your destiny does. Hiphop is a calling, as much or more than it is a career."

By Katelyn Hackett. Katelyn covers local hiphop and other topics for Seattlest.com and writes freelance for other publications.
Posted by B-Girl Bench at 3:23 PM