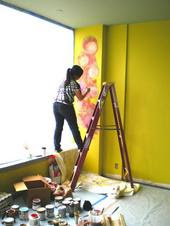 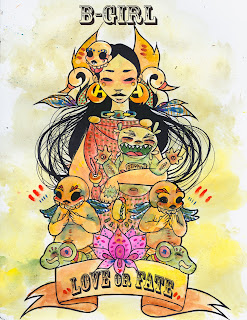 Angel 179's colorful murals dot the Seattle-area cityscape with whimsical creatures and graceful lines. She's been painting for a decade, and shows no signs of slowing down; given the opportunity, the opinionated artist behind the murals will deftly transform not just concrete but skateboards, sneakers, and stretches of canvas. "If you don't love it, don't do it," Angel says firmly. "Go into everything with that intent." Angel isn't in it just for the love of art, though: she is dedicated to making her community a more beautiful place both visually and spiritually.

Angel got her start tagging in the CD, and though she made a quick and earnest foray into breakdancing, her true element was the visual. In middle school, she began to paint murals as a volunteer for community organizations and schools. "I had a really good upbringing from the community. Seattle's good for that," Angel says, and credits a tight group of friends and mentors with helping her to clarify her calling. "They were able to help me come up with my own definition of what hip hop is, what I think graffiti is. And from there I was able to develop my ideas of what being a woman in hip hop is, a person of Mexican descent in hip hop is."

The talented painter shows her artwork nationally and makes a living doing freelance graphic design. In addition, the community support she received as a teenager meant so much to Angel that she has returned as an adult to teach classes to youth at Seattle public schools and community centers. "I want to help people who were like me growing up, who were confused, of color. There were people who came back for me, and I want to do that for others," she says. "I can't live off that, but it's something I've dedicated myself to doing."

Though she firmly believes in the power of community affirmation and mentoring, Angel doesn't shy away from controversy. Her work often features religious symbols, a choice not always popular with her family. "My grandparents don't like that I paint Catholic things, they think it's blasphemous. It's scaring my grandma," she says. But as an artist, Angel knows that provocative symbols can be the perfect way to explore universal and personal human emotions. "The cranky baby Jesus that [Angel's Virgin Mary] holds, that's kinda like me, scared or confused, angry or hungry," she explains. "When people look at my [work featuring Virgin Mary], they say, "oh, is that woman you?" And I say, "No, that little crying thing is me!"

A woman in the male-dominated world of hip hop, Angel has seen and experienced her share of sexism. "Everybody thinks you're a ho or someone's girlfriend, and so they overlook you. I've had that happen at art shows, even, with people on the inside of the community… A lot of my artwork is mistaken for men's artwork, they would think it was my boyfriend's art, or that it was my boyfriend who got me into graffiti. But I was into graffiti before I met anybody," she says, making it clear this is not about impressing a guy or following someone else's lead. "Seattle was always a little bit more open for women… But we're always gonna have to deal with sexism."

With so many jobs and an increasingly hectic travel schedule, when does Angel paint? "I get up super early. I love the quiet. I don't think if I was working a real-deal 9-5 job that I would be able to do art, and I would just come home and watch TV. Which is not what I want to do." Ever moving forward, Angel's excited about her plans for the future. She talks about doing murals with kids in Mexico, or pushing the boundaries of her artwork here in the States: "I want to take my paintings and make them three-dimensional. Make it a performance."

Find out more about Angel 179 and her art on her website, onesevennine.com and on her Myspace at myspace.com/onesevennine.

Written by Katelyn Hackett. Katelyn covers local hiphop and other topics for Seattlest.com, Seattle Sound Magazine and writes freelance for other publications.
Posted by B-Girl Bench at 3:02 PM